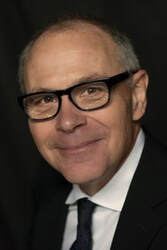 John Derrick is an experienced appellate lawyer who since 2005 has litigated over 150 appeals and writs — including 23 resulting in published decisions — and has consulted in countless other matters. Not long ago, he won four reversals from the California Court of Appeal in a single year, as well as grants of both a writ petition and a petition for rehearing. Once, he obtained five reversals in quick succession in a 12-month period.

John primarily represents private individuals and privately owned businesses. Like most appellate specialists, he is a subject matter generalist — so whichever side of an appeal he is on, he can bring his appellate expertise to a wide range of legal issues. His specialization is in the art of the appeal.

John is certified as a Specialist in Appellate Law by the State Bar of California’s Board of Legal Specialization. He is also a 2020 Southern California SuperLawyer, described as “an honor reserved for those lawyers who exhibit excellence in practice” and given to only five percent of attorneys in California.

John was the 2014-2015 Chair of the California State Bar’s Standing Committee on Appellate Courts, and from 2011-2013, he served as Editor-in-Chief of California Litigation, the journal of the Litigation Section of the State Bar. He later served on the Executive Committee of the Litigation Section of the California Lawyers Association. In addition, John is an appointed member of the Second District Court of Appeal’s mediation panel. And he serves as a Settlement Master for the Santa Barbara Superior Court.

John frequently lectures to other lawyers throughout the state on appellate matters and takes part in panel discussions at continuing legal education events. He once led a panel at the Appellate Judges Education Institute on the subject of “Cost-Effective Appeals.” He has also taught as a practitioner-advisor in the Berkeley Law Appellate Advocacy program, tutoring some of the nation’s brightest law students in the art of brief writing and oral argument.

Before entering the legal profession, John founded, operated, and sold two specialized information publishing businesses in the US and UK, one of which was acquired by one of the world’s largest publishers. He combined the role of publisher and editor, making it his mission to present complex analysis and data in as readable a style as possible. During his business years, he took a year out to serve as Special Adviser to the Energy Secretary in the UK Cabinet.

John holds US and UK private pilot licenses and has an FAA instrument rating. He is an avid traveler, who has visited 94 countries — often reaching remote regions — and is aiming for 100. In normal times, he runs half marathons at least six times a year.
​